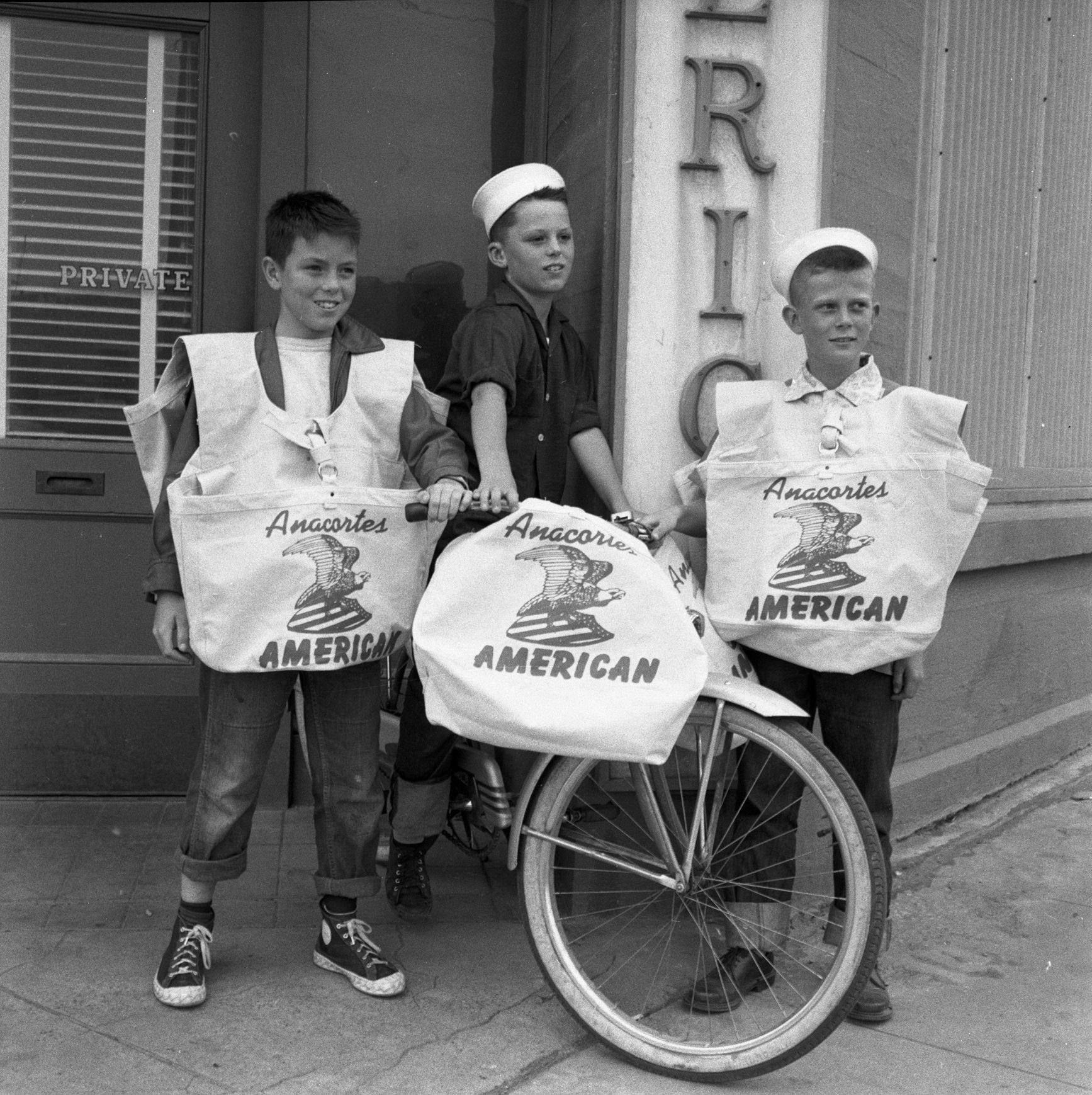 Recent Update: Check out a PDF of the full exhibit below!

This exhibit calls attention to the role of newspapers and journalists on Fidalgo and Guemes islands. It also celebrates the new online availability of the first 40 years of Anacortes newspapers. These are made available by a joint effort of the Anacortes American, Anacortes Museum and the Washington State Library, with support from the Anacortes Museum Foundation and the Skagit Community Foundation.

Anacortes was founded by a journalist whose wife’s name, “corrupted in the interest of euphony,” was officially bestowed 140 years ago as the name of our post office, on March 13, 1879. Amos Bowman, who wrote for Horace Greeley‘s New York Tribune newspaper in the 1850s, followed his boss’ advice to “go west” and began publishing the Northwest Enterprise here in 1882. From 1890 onward the Anacortes American covered local news, joined at various times by other long forgotten journals.

Many newspaper publishers, including Amos Bowman and Legh Freeman, were also visionaries of imagined communities. They platted and promoted frontier towns, Anacortes and Gibralter respectively, which rarely lived up to their dreams or hype. Noting the historical context, these newspapers include materials that reflect the attitudes, perspectives and beliefs of different times, which includes unique detail about local personalities and occurrences from this period.

Anacortes Museum staff utilized the newly online and searchable newspapers, hosted on the website of the Washington Secretary of State, to trace historical threads to fascinating biographies of the men and women who collaborated and competed “in the stormy sea or journalism” on local shores.

These writers boosted the prospects of Anacortes even when “the puncture of the ﬁnancial bubble left it in dire straits,” as founding American editor Douglass Allmond described the 1890s bust, when he struggled to publish “on an old army press” with prominent citizens pitching in.

The newspaper-focused exhibit opened with a reception on March 13, 2019 at the Anacortes Museum’s Carnegie Gallery, 1305 8th Street, Anacortes. March 13, 2019 happens to be the 140th anniversary of the founding of Anacortes. At the exhibit, you will see old newspapers, photographs, printing equipment and more. Read all about the lives and work of early Anacortes writers Douglass Allmond, Sophie Walsh, Charlie Gant, and their successors like Wallie Funk and all the rest whose news is now history.